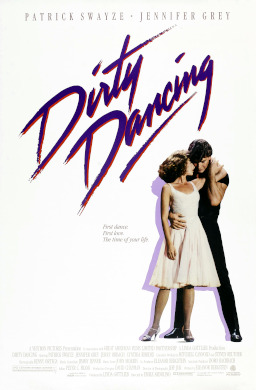 In
the 1960s, Frances "Baby" Houseman, a sweet daddy's girl, goes with her
family to a resort in upstate New York's Catskill Mountains. Baby has
grown up in privileged surroundings and all expect her to go on to
college, join the Peace Corps and save the world before marrying a
doctor, just like her father. Unexpectedly, Baby becomes infatuated
with the camp's dance instructor, Johnny, a man whose background is
vastly different from her own. Baby lies to her father to get money to
pay for an illegal abortion for Johnny's dance partner (Johnny is not
the father). She then fills in as Johnny's dance partner and it is as
he is teaching her the dance routine that they fall in love. It all
comes apart when Johnny's friend falls seriously ill after her abortion
and Baby gets her father, who saves the girl's life. He then learns
what Baby has been up to, who with and worse - that he funded the
illegal abortion. He bans his daughter from any further association
with "those people". In the first deliberately willful action of her
life, Baby later sneaks out to see Johnny - ostensibly to apologize for
her father's rudeness - and ends up consummating her relationship with
Johnny. A jealous fellow vacationer sees Baby sneaking out of Johnny's
bungalow the next morning and in an act of retribution, tells
management that he is responsible for a theft the evening before,
knowing he would not furnish his real whereabouts. In an act of
bravery, Baby states that Johnny is innocent, and alibis him by
confessing that they were together all night. This revelation causes a
huge rift in the family and Baby makes an impassioned speech to her
angry and bereft father. At the closing night performances, and
although he has been fired and banned from attending, Johnny returns
and takes the stage to tell everyone about the woman whose faith in him
and whose courage changed his life. They do one final show-stopping
dance together. Baby's father learns that Johnny was not responsible
for his partner's pregnancy and learns to accept that although his
beloved daughter is transitioning to womanhood, she will always love
him.