Whitney Elizabeth Houston (born August 9, 1963) is an American singer, song writer, actress, record producer, film producer, and former fashion model. Houston rose to international fame in the mid-1980s and her crossover success opened doors for many other African American women to find success in pop music and movies.[2][3] She is frequently referred to as "The Voice"[4][5], and is known for her "powerful, penetrating pop-gospel voice". Houston has been credited as having a five octave vocal range[6][7].

In the 1980s, Houston was one of the first African-American female artists to receive heavy rotation on MTV in its early years, when the network was leaning more towards a white male rock dominated format.[8][9] Her debut album became the biggest selling debut album of all time for a solo artist, her follow up album was the first album by a female artist to debut at #1 on the Billboard 200, and she holds a record seven consecutive #1 singles on the Billboard Hot 100 chart, beating a record of six held previously by both The Beatles and The Bee Gees.

Houston continued her success into Hollywood in the 1990s, starting with the box office hit The Bodyguard. The soundtrack to the movie is the best-selling soundtrack of all time, and the single "I Will Always Love You" the best-selling single by a female artist and 6th best-selling song in the history of music.[10] She continued the decade with other successful and culturally significant projects before returning to the studio. Houston is the fourth best-selling female recording artist in the U.S according to the RIAA,[11] and is the "The Most Awarded Female Artist of All Time"[12] according to the Guinness Book of World Records.

Houston married R&B singer Bobby Brown in July 1992 and rumors of drug abuse began to circle around the couple a few years afterwards. Stories regularly appeared in the tabloid press regarding her personal troubles and it started to affect her professionally. After successful trips to rehab, Houston divorced Brown and gained custody of their only child together in 2006. She has since been working on her seventh studio album.[13] 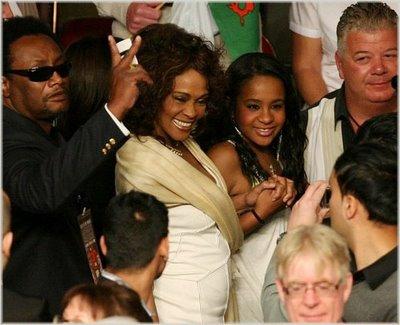